How to Deal With Cars Tailgating Motorcycles

Tailgaters are drivers that follow too closely to the point that if you need to brake sharply, it’s unlikely that the following vehicle would stop in time and a collision would ensue. As a vulnerable motorcycle rider who’s not protected by a metal box, it’s hardly an ideal situation. Let’s look at tips on how to deal with cars tailgating motorcycles. 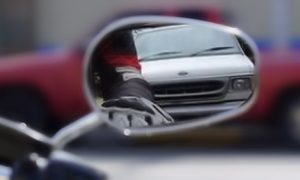 As drivers and riders we often regard our own riding skills as high or very high and sometimes fail to acknowledge that improvements can be made, particularly if you’re a new rider. If you think that you’re acquiring more than your fair share of tailgaters, it might be time to look at why.

If you tailgate road users, it’s hardly fair to complain when others do it to you. If you’re a new rider, remember that you’re vulnerable and that you never know the temperament of the driver in front. Following them closely even if you intend on overtaking may be seen as trying to intimidate or challenge them. As roads become busier and more congested, drivers are also becoming more frustrated, resulting in more incidents of road rage. Always maintain a safe following distance and if you need an estimation of what this is, use the 2 second rule.

Overtaking and sharply cutting back in close to the front of a vehicle is a manoeuvre that can also enrage drivers. Most sensible drivers will ease off creating a bigger gap for you, but again, you never know who it is that you’re overtaking. You may have now inadvertently created a road rage incident where that driver tailgates you. Only overtake if you have a motorcycle that is powerful enough to do so:

If you have misjudged road conditions and cut in a little close to a vehicle, attempt to defuse a potential situation by giving the driver a quick wave.

No matter how safely you ride, you’ll always get tailgaters. Why do they do it? Lots of reasons – some like to bully and intimidate the driver / rider in front, others have no idea they’re doing it and some drivers don’t even ‘see’ motorcyclists and only deal with what’s going on in front of the bike.

The reasons probably go on, but the point is, if you get angry then your attention will be diverted from the front to the rear, looking round or looking in your mirrors too much. Getting angry may also result in you doing something that may escalate the situation and make matters worse such as a rude hand gesture. Instead, your attention should be on how to make this hazardous situation a safer one.

This isn’t to irritate the tailgater, but to increase your stopping distance. It might be tempting to speed up, but this will only decrease the gap between you and the vehicle in front making the situation more hazardous. If you have a tailgater, you now need a safe stopping distance for not only yourself, but the driver behind. Slowly create a safe enough gap from you and the vehicle in front so that if traffic slows down, you can ease off at a leisurely rate whilst also giving the driver behind plenty of time to do so.

If the driver behind isn’t backing off and allowing you to slow down, or it isn’t safe or legal to overtake, the pull over or turn off into another road. Don’t think that by pulling over is letting the tailgater win. It’s about you being sensible, superior and saving yourself from a potential accident. The tailgater will at some point learn the hard way, just don’t let it be with you. After all, it only takes a few seconds to pull over and move off again.

Wearing high visibility clothing allows you to stand out more, particularly for those drivers that don’t see bikes, but see past them. Additionally, can can get high vis jackets that look very similar to those that the police wear – certainly making you stand out.

You can take this even further if you wish, with high vis police jackets with the word POLITE written on the back which looks a lot like POLICE. This is a somewhat controversial item of clothing as it can be seen as misleading other road users and possibly edging into impersonating a police officer – though no one has ever been arrested because of wearing one. The POLITE jacket will unquestionably get you noticed, but may irritate some road users.

Other Methods for Dealing with Tailgaters

Whilst these methods wouldn’t be recommended by any training officials, some motorcycle riders find that they work.

Giving your rear brake light a few quick flashes may help an oblivious following driver to acknowledge they’re being a hazard and back off. Ensure you don’t engage the brake and unexpectedly slow down – this is the last thing you want in front of a tailgater.

As previously said, some drivers are oblivious to motorcycle riders and tend to look past them. Swapping from one wheel track to another, then back again may gain their attention.

Not the rude type, but the slowing down gesture or similar. Can work well, but depending on the driver, it might anger them and make the situation worse. A slowing down hand gesture followed by a thumbs up gesture will help to show them you mean well.