Previously we covered moving off on a motorcycle. You will of course need to know how to stop safely and under control using motorcycle braking techniques.


Many of us start riding bicycles as youngsters and are either taught, or quickly learn that heavy use of the front brakes can either result in the front wheel skidding out of control, or grip so harshly that you end up being tossed over the handlebars.

From this often stems a fear around the use of the front brakes on a bicycle, which will often naturally follow through to motorcycle braking.

Before we get into braking techniques, the most important aspect of a motorcyclists dependency on the brakes is to actually use them as minimally as possible. Forward planning so that you are looking well ahead at potential and developing hazards will allow you to ease off the throttle earlier, therefore reduce the necessity for harsh braking. Anticipation is also a skill that reduces braking. For example, if you see some distance down the road that a traffic light has been on green for some time, you can anticipate that there’s a good chance of it changing before you reach it, therefore you can ease off sooner.

Motorcycle braking forces in a straight line. Motorcycle and rider weight is forced down and forward

As you brake harshly on a motorcycle, that finely balanced machine suddenly becomes significantly less balanced with much of the weight shifting to the front wheel. Traction between tyres and tarmac allows for the motorcycle to slow down and stop. The greater the weight, the greater the traction, therefore the front brake is by far the most efficient on a motorcycle. Essentially, to gain the most effective braking from a motorcycle, you’ll need to use both the front and rear brakes in the form of progressive braking.

How to Use Motorcycle Brakes

Jamming on the front brake in particular is likely to result in the tyre skidding and a loss of control. The bike and yourself will have a lot of momentum and weight. The wheels might have stopped, but you and the bike will want to carry one.

Progressive braking is increasing the brake lever pressure in increments, squeezing it slowly rather than a single, continuous quick pull of the lever. This braking technique helps to prevent the wheels from locking, therefore offering better control and if a locked wheel (skid) does occur, it’s likely to be easier to regain control. For greater stability, use the brakes when your motorcycle is upright and traveling in a straight line.

Wet, slippery roads results in less traction. A locked front wheel on a wet road can easily result in the rider coming off. When the roads are wet or slippery, an equal pressure must be applied to both the front and rear brakes. 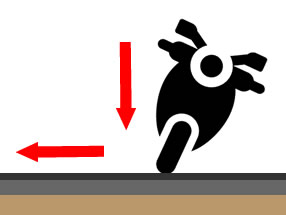 Motorcycle braking forces on a corner. Weight is forced outwards and down at the front if braking

A motorcycle is far more stable when using the brakes upright and in a straight line. Planning ahead is essential so that you can slow down in good time to avoid braking in corners. As you travel around a corner on a motorcycle, the weight of the bike and the rider is pushed outwards (centrifugal force), which is why a rider leans in to compensate for this.

Always avoid using the brakes whilst traveling around a bend, particularly in wet or slippery conditions. If you must use the brakes on a corner, avoid using the front brake and instead use the less powerful rear brake along with engine braking to slow the vehicle.

Engine braking is a technique used for naturally allowing the motorcycle to slow down. For further information, see: