One of the more challenging aspects of riding a motorcycle is using the gears, or more specifically changing up and down gears.


To change up and down gears, coordination is required between the clutch which engages or disengages the engine, the throttle which revs the engine and provides power from the engine and the gear selector. With a little practice however, it’ll soon become second nature.

Essentially, if you pull the clutch lever fully in using your left hand, the engine is disengaged so you’ll not go anywhere. If you release the clutch lever and you are in gear (not neutral), the bike will move forward.

If you haven’t done so already, you’ll need to gain an understanding on the gear selector lever on your specific motorcycle.

How Many Gears Does a Motorcycle Have?

The amount of gears that a motorcycle has varies as it depends on the particular make and model. Smaller low powered motorcycles may only have 4 gears, whilst larger modern motorcycles may have 5 or 6 gears. 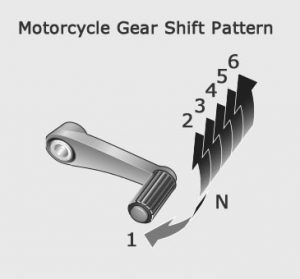 You’ll need to use your left foot to operate the gear lever to select 1st gear for moving off and higher gears as you gain speed. Before operating the gears, you should fully pull the clutch lever in. The typical gear shift pattern is as follows in the diagram.

At some point between the clutch being disengaged and fully engaged is the biting point. The motorcycle clutch biting point is where clutch effectively begins to connect the wheels to the engine and if this is done to quickly, it may result in a sharp jolt of the vehicle. It’s important then to release the clutch slowly until you understand where the bite point area is within the working travel of the clutch.

When you gain more experience, you will only need to squeeze the clutch in just past the biting point and not all the way to the grip. Motorcycle clutch biting points vary in location depending on the particular make, model and how much wear the clutch has had.


Changing up a Gear

As you increase speed, listen to the engine as this will help you determine when you should change up. If the engine is revving high, it will increase fuel consumption and also increase stress / wear on the engine. To change up a gear, you should:

Use this same method each time you intend on changing up a gear on your motorcycle.


Changing Down a Gear

You’ll also need to practice changing down gears on your motorcycle. There are a few reasons why you will need to change down a gear. These are:

To change down gear you should:

Once you have changed gear, it’s important that you fully release the clutch as soon as is safely possible. Keeping the clutch pulled in for too long is called coasting and can be potentially dangerous. For further information, see: